Many visitors are surprised to find that Mallorca has much to offer birders, botanists, and divers in the many land and marine nature reserves.  The island is an important stopover for many types of migratory birds as well as local species.

On the flora side, Mallorca is home to a great variety of flowering and aromatic shrubs, and typical Mediterranean trees such as Aleppo pine, holm oak, olive, almond and carob, as well as citrus varieties.  Marine life around the islands is particularly diverse and rewarding for divers. 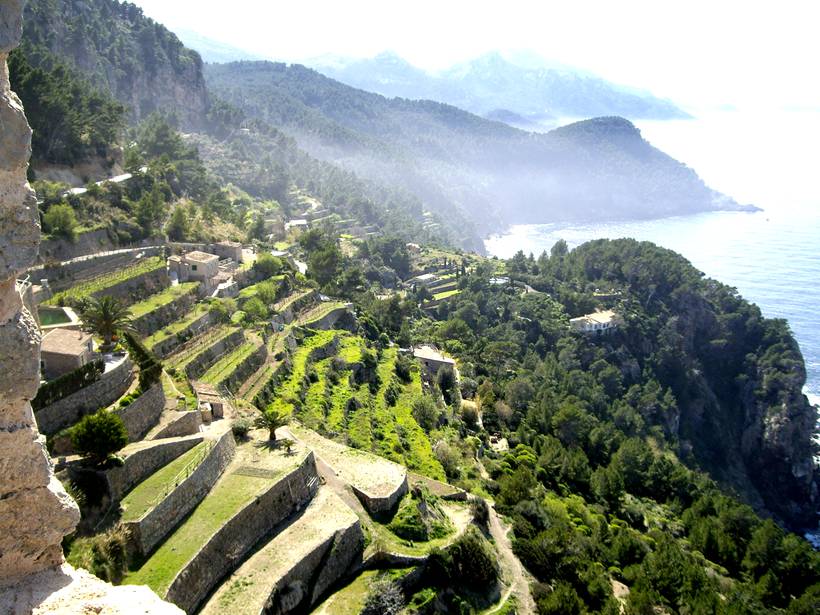 Exploring a city looking for decent bars can either be a great deal of fun, or hugely frustrating. Without any insider knowledge, there is a danger of wandering the streets for hours without finding anywhere that you actually want to spend your drinking tokens.  But of course, there is always the prospect of stumbling across some absolute crackers. In the name of 'research', on Saturday night, The Frenchman, James (who does our video reports), and your correspondent decided to take our chances, and explore the streets in and around La Llonja, in Palma.

La Llonja is the district to the west of the cathedral, and it’s a lively area in town and where many locals and visitors to Palma head for an evening out. It consists of the narrow pedestrianised streets associated with Gothic quarters in Spanish cities and is filled with tapas bars, restaurants, drinks bars, and jazz clubs. But beware: tourist-trap drudge rubs shoulders alongside some much better places - not all bars are created (or run) equally well.

Now... we should probably let you know, we have a certain tastes and styles of places we like to go. Mostly we like cool, hip hangouts, usually something modern, contemporary and stylish. Somewhere innovative, with interesting decor, and a good atmosphere also gains our approval. We like the place to be buzzing, with good music, and a fun crowd. And great cocktail options are a bonus - as our preferred method of intoxication - but we are happy with an alternative beers selection, and wine will go down the same way!

To kick things off we went directly to C/Boteria, which is around the corner from Placa Llonja. This is where we wanted to try out Neo Cultural. Neo Cutural has an upbeat, funky looking interior offering a restaurant/tapas bar and cocktails - but tonight we were only 'researching' it's booze credentials. The small bar was crowded with pretty young things relaxing to the background tunes and the accomplished bartenders soon knocked us up a Manhattan (good, but lacked maraschino cherries, much to The Frenchman’s 'chagrin'), a Moscow mule (more watery than expected) and a mojito (pretty much perfect). We really liked the style of the place and the overall atmosphere, we were tempted to stay for another but in the interest of this report, we moved on.

Next stop was around the corner in C/Sant Joan – Tasu tapas bar for a quick bite to eat and another mojito. To be honest we have been in here before for passing drink, but we needed a quick snack and we thought ‘why not’. Tasu serves a mix of Asian and traditional Spanish tapas and, taste-wise, pretty satisfying they were too. Not being a cocktail bar, the mojito we ordered was not right up there with the best, although we are particularly picky about getting such things just right. Still, stomachs lined a tiny bit we headed on.

However, in order not to be missing out on the ‘local cuisine’ we persuaded ourselves to try another tapas bar, perhaps as a benchmark, and chose El Cuerno, as they usually seem to be fairly busy (we thought maybe this was a sign they had something good on offer), just up the road from Tasu on the corner with C/Apuntadors. This is a more traditional tapas bar – but very brightly lit, dated decor, and the usual suspects on the menu. Sadly, in hindsight, this was a mistake for us – it’s not what we usually go for, the whole thing didn’t quite hit the mark for us; the meatballs in particular were not great. With some great tapas around (we’ll be reporting on this in the near future), we were disappointed with our hastily made detour, but you see how easy it is to make a wrong choice in a place like this.

We retraced our steps and turned left on to C/Vallseca. This little street has several small bars and cafes on it. We chose to avoid La Belle Epoque which had latin rhythms blaring out if it, and chose an altogether more discreet bar called Es Jac. This tiny bar wouldn’t be out of place in Barcelona, or Tatouine(!), with its rather bizarre giant urn/tree in the middle of the room, and the art films showing on a screen next to the bar. Painted white throughout, it seems to be a natural home for creative types and adventurous visitors, although James and The Frenchman were reminded of the bar in Star Wars. We chose a caipirinha (short & strong), a mojito (the addition of angostura bitters didn’t do it for us) from the cocktail list, and a margharita for which the bartender needed a bit of help from a recipe book. Still, it ended up being a pretty decent attempt and we sipped our cocktails to the music of Dead or Alive (You Think You’re A Man), Baltimora (Tarzan Boy) and other 80’s favourites. A quirky mix of cool bar and 80's tunes, but somehow, it works.

We walked along the street to our next bar – Agua. Billed as the 'best music bar' in Palma, we were intrigued by what they would classify as ‘the best music’. As we walked in, James was immediately excited – ‘It’s the Smashing Pumpkins. Let’s never leave. EVER!’. If, like our twenty-nine year old teenager side-kick, you like Indie and Rock music then this is the place for you. It’s an unpretentious friendly hangout, and the English-speaking (from New York) bartenders are very welcoming and highly knowledgeable about their music. James was very impressed that they sold Duff beer (from The Simpson's cartoon) and asked for a job if he could be paid in the Simpson’s styled beverage. Agua has open mic nights (Sundays), Ladies nights (Thursdays) and Flip night on Mondays, where you could end up drinking for free if you guess the side of the coin correctly. As you can imagine, it’s a fun place, in a grungy sort of way, to hang out. Indeed, I had to drag James and The Frenchman out in order to continue our crawl.

Next, we popped our heads into Bluesville Bar (C/Ma des Moro), on passing recommendation of a friendly American who seemed to like jazz, where a band was playing to a full house. Sensing that they were about to finish their set, we didn’t stay, but made a mental note to return another evening. We passed by Puro Hotel on C/Montenegro, which has a bar on the ground floor. It was heaving with bodies and the boys were keen to rub shoulders with the Euro-crowd inside. They were however thwarted, as the bar was about to shut – it has a 2am license. It seemed like it was time to head up to the western end of Passeig Maritim (the main bay and marina in the city, which La Llonja is just the start of) and the late-late opening bars and clubs. We jumped in a cab (€5) and headed for Can Barbara.

Can Barbara is a cute little marina area just behind the Passeig Maritim by the Abraxxus nightclub and just before the Club de Mar complex. There are three bars here, all of which have live DJ’s playing clubby tunes, and all frequented by a friendly & relaxed clientele. No entry fee and a license to 4am at weekends make this area a must for night-owls.

We started in El Garito Cafe, where a Scottish DJ was playing Nu-Disco (apparently) to a packed dance floor. Despite there being a great selection of drinks at the bar, James presented us with three tequila shots – ‘she gave them to me’ he said innocently, before adding, ‘well, I did ask for them...’. El Garito has a full events calendar, with bands and DJ’s from all over the place making appearances. It’s well worth a trip and we really liked the atmosphere in here.

We then headed over to the rather smarter-looking Woody+. It has a comfortable terrace out front that backs on to the marina and the whole place has a sleeker feel than the Garito. As it was after 3am by this point, we were asked to head inside so as not to disturb the neighbours. The bar has a Moorish interior, with very fancy coloured mosaic glass light fixtures, and domed ceilings, with DJ decks situated above the bar. Our caipirinhas were just right and the bar manager was happy to chat to us and told us about a beach party the following day over in Puerto Portals.

After finishing up at Woody’s, we popped our heads into the final bar on this marina, Cassette, where the music was louder and the dance floor full, before deciding that we were maybe a little too old for it, or maybe just not quite Spanish enough. As we wandered back towards the Passeig Maritim we stopped briefly outside Abraxas (open til 6am), where there was a short queue for entry. After discovering it would cost €15 each, and deciding that we would probably only last another 30 minutes, we hailed a taxi and headed home.

Overall we were pretty pleased with the places we had been. There is definitely more to go back for, and there are some great places to pass the evening down in Palma, without having to resort to the faceless and tacky drinks bars along the front.

Unfortunately there are no accommodations at this location at the moment.